150 elderly residents evacuated after a fire started in the roof space of the 3-storey care home.

On Thursday August 8th, the Beechmere Care home in Crewe set alight after a fire broke out of the roof space and quickly spread across the building. 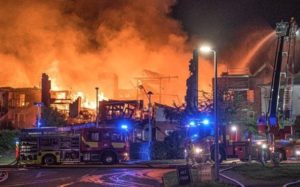 The ‘stay-put’ policy which was in place for fire emergencies was quickly overturned due to the speed of the fire; this meant that residents evacuated the premises immediately rather than executing a phased evacuation. Assistant Chief Fire Officer Gus O’Rourke said that doing this saved lives.

An investigation has been launched to identify the cause of fire; in particular how it spread so quickly. Cheshire Fire and Rescue have stated it doesn’t appear to be a deliberate event.

Cheshire Fire and Rescue’s Head of Protection Lee Shears said: “It is clearly still very early days in our investigation, but what we do know is that the fire started in the roof area and spread rapidly. It appears, at this stage, to not have been a deliberate act.”

There are fire regulations by HM Government¹ in place for the containment of a roof space; the regulations state that any roof space greater than 20m² (no more than 20 metres between fire stopping walls) must be compartmentalised with fire resistant materials (cavity barrier) resistant to greater than 30 minutes. 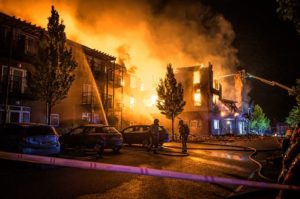 Pictures from Cheshire Fire and Rescue